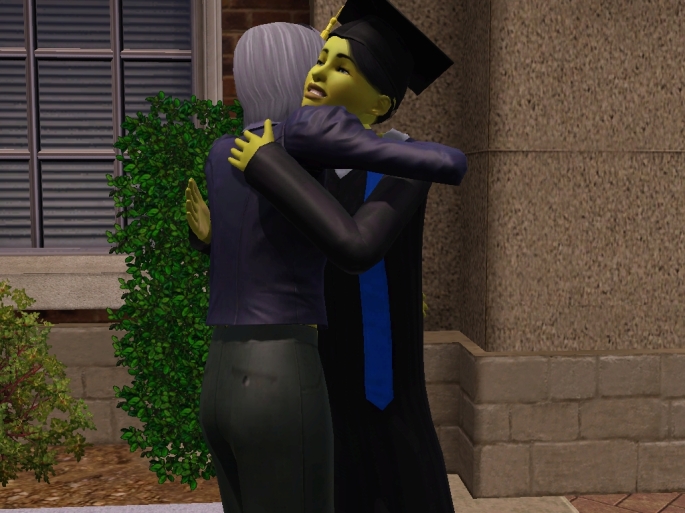 Following graduation grandma gave me a big hug and told me how proud of me she was. Of course my mother couldn’t be bothered to attend but Ethan and Maritza came as well as my dad. I was just thinking what a wonderful day it was when tragedy struck. 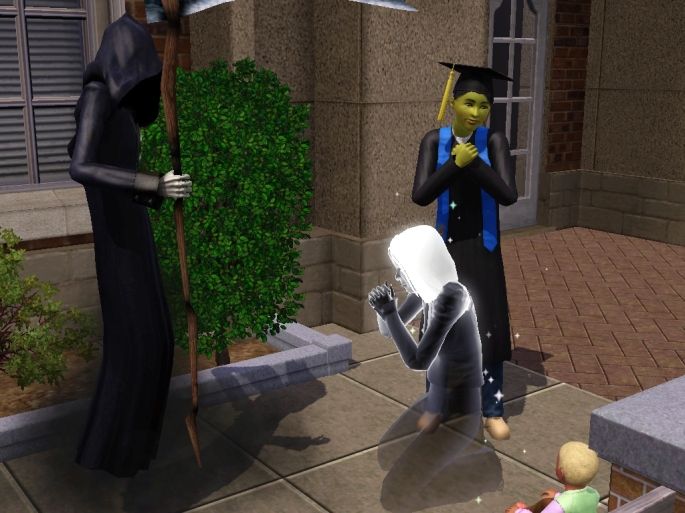 The grim reaper came to take my grandma. She begged to stay just a little longer but it was her time. She was 106. 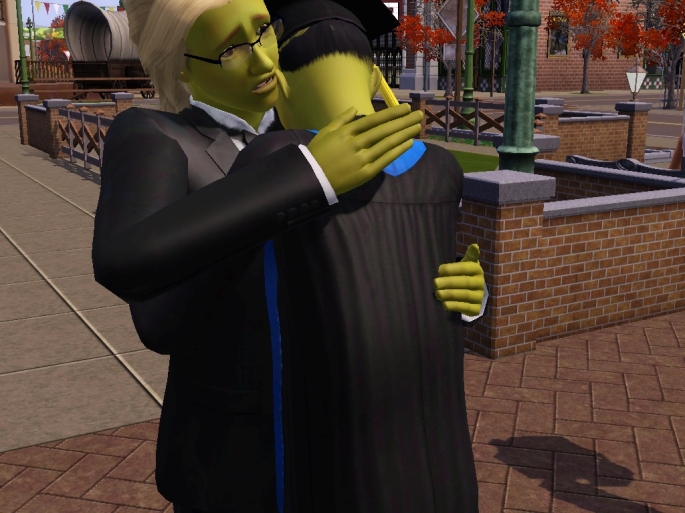 I was devastated but fortunately Ethan was there to comfort me. He and Maritza had been planning on looking for a place of their own but he told me they would stay at the house for awhile so I wouldn’t be all alone. I know mom lives there but we are not close and barely speak. 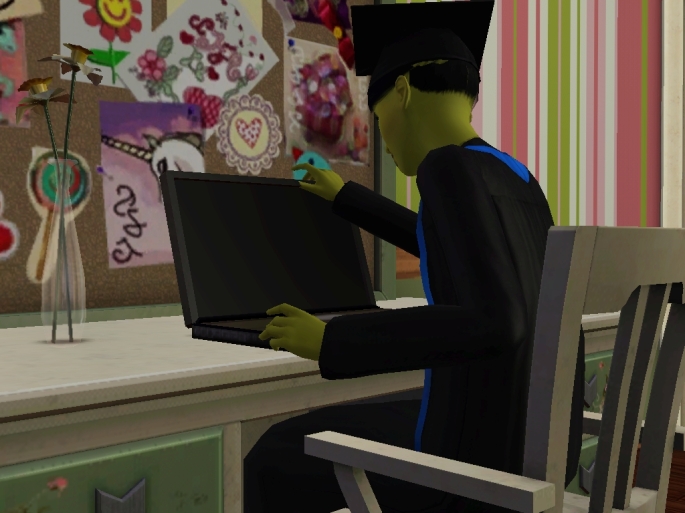 When I got home I immediately went to my computer and started my dream job of opening up a home daycare. 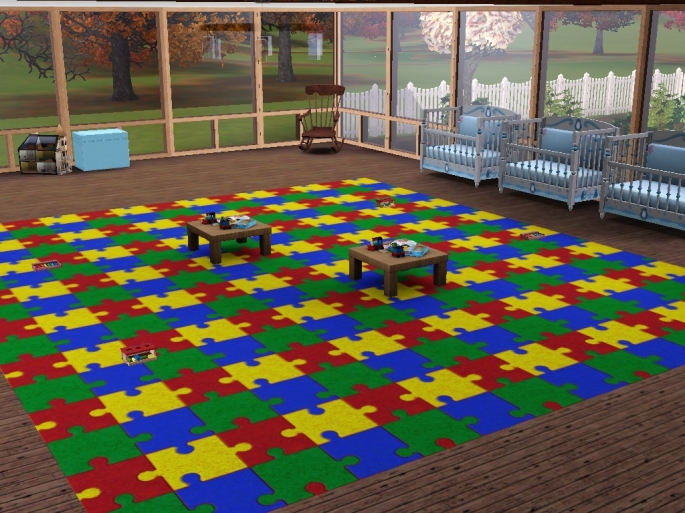 Grandma left me some money which I used to convert the barn into the daycare center which I filled with lots of toys and books. 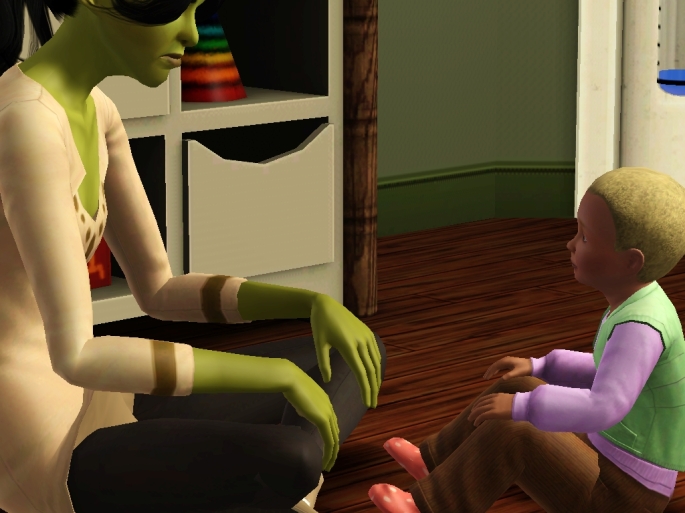 When Maritza and Ethan were at work I would of course watch my little cousin Franklin. 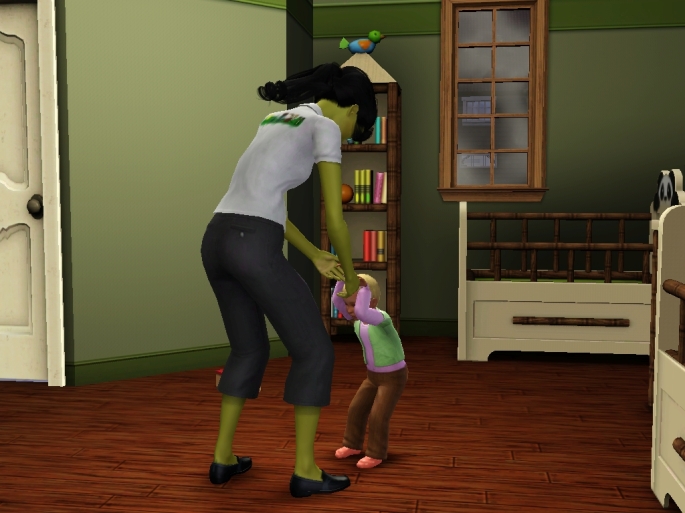 I taught him all of his important skills like walking, talking, and using the potty chair. 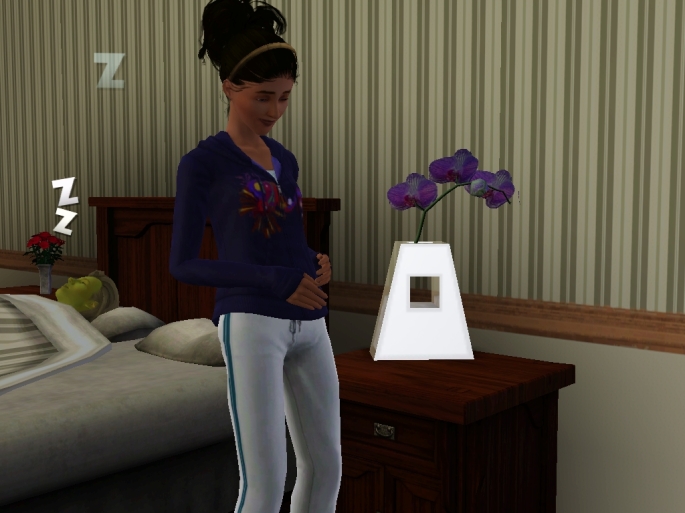 Maritza recently found out that her and Ethan are expecting again. 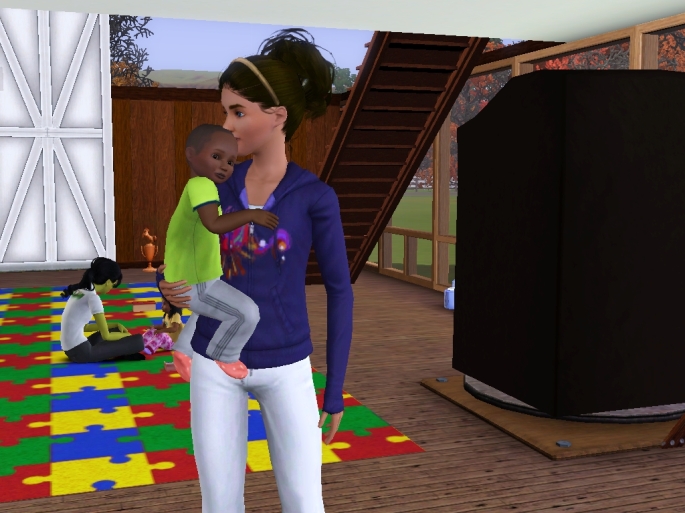 Since the hospital put her on maternity leave she has been helping out at the daycare. In addition to Franklin I watch three other kids all under age 5. So with four toddlers around having an extra set of hands has been great.

Having the daycare has been great. I love playing with the kids and reading to them. I can’t wait to have a child of my own someday. 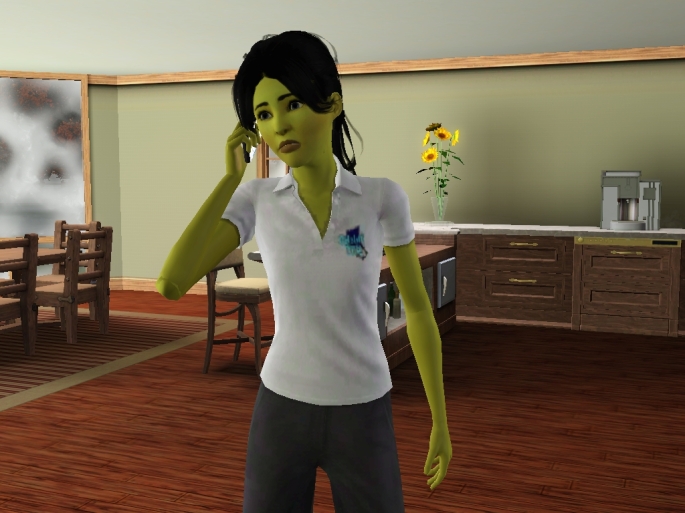 “Hello, this is Fionna”

“Hello, Fionna. My name is Eve Sanders and I am with Twinbrook Adoption Agency. I heard from my cousin, who lives in Appaloosa Plains that you are wonderful with children. Her son Michael goes to your daycare. Anyway the reason I am calling is have you ever considered becoming a foster parent or adoption? We have a little boy here named Fletcher. He was put up for adoption as a baby and went to a lovely couple. From what I can tell he has been a wonderful and happy child for the last seven years. About six months ago the family moved here to Twinbrook. They were only here a short time when tragically the boys parents were killed in a car accident. They hadn’t been here long enough to make any close ties and from everything we can find the couple were both only children with deceased parents. So the boy has no living relatives. Twinbrook is a small community and I haven’t been able to find him any sort of long term placement here. I know it is probably really unorthodox me calling you but when my cousin told me how great you were with kids I thought maybe you would be willing to take Fletcher in.”

“I am honored that you would think of me Miss Sanders but how can you be sure that Fletcher would be happy here. He doesn’t know anyone in Appaloosa Plains. Surely the family had some close friends from before they moved to Twinbrook.”

“The family moved a lot due to the nature of the husband’s job so it doesn’t seem they were in one place long. I really think he would fit in well with you. To be honest I wasn’t sure about calling you with this until happened to see a picture of you with Michael that my sister had on her Simbook page. You and Fletcher look a lot alike. You could pass as brother and sister or even mother and son. You have the same hair, eye, and skin color not to mention similar facial features.”

“I understand that his adoption was probably sealed but can you at least tell me where he was born?”

“Miss Sanders I would be happy to take Fletcher. I can’t wait to meet him.” 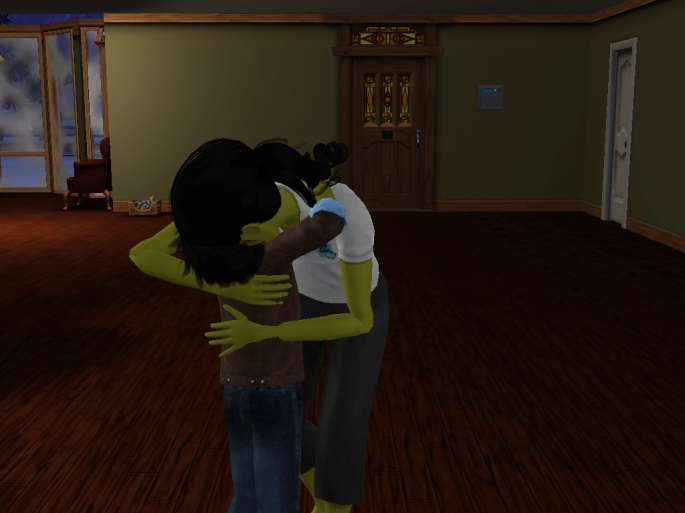 Fletcher arrived the next morning and I pulled him into a big hug.

“Welcome to the family,” I said. “I know you just lost your mom and dad and that is really hard. I want you to know that I am not going to try to replace your parents. I don’t expect you to call me mom. You can call me Fionna or even Fi (Fee) if you prefer.” 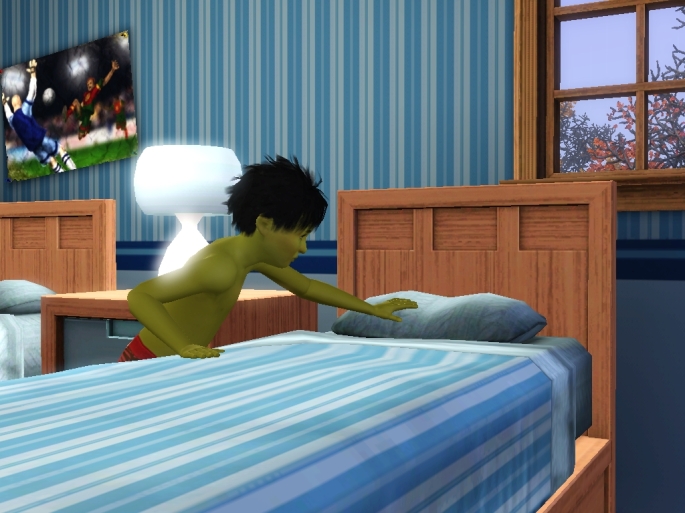 Fletcher is a great kid. He makes his bed every morning and always does his homework after school. 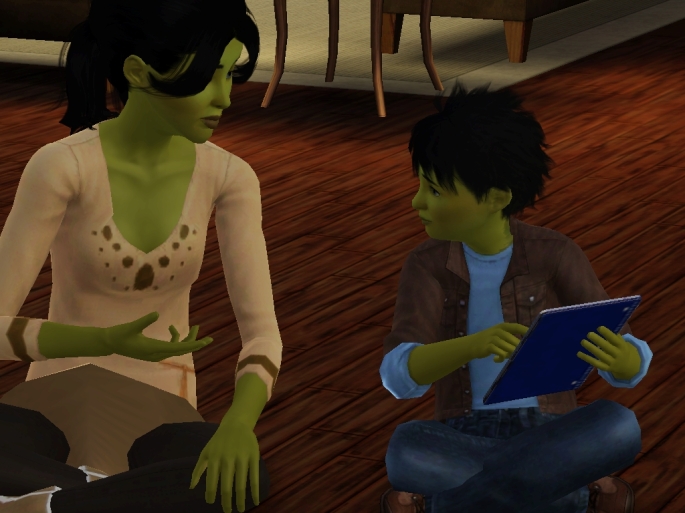 Since he started the school year late here in Appaloosa Plains he does have some catching up to do so I make sure I am available to help him out when needed. 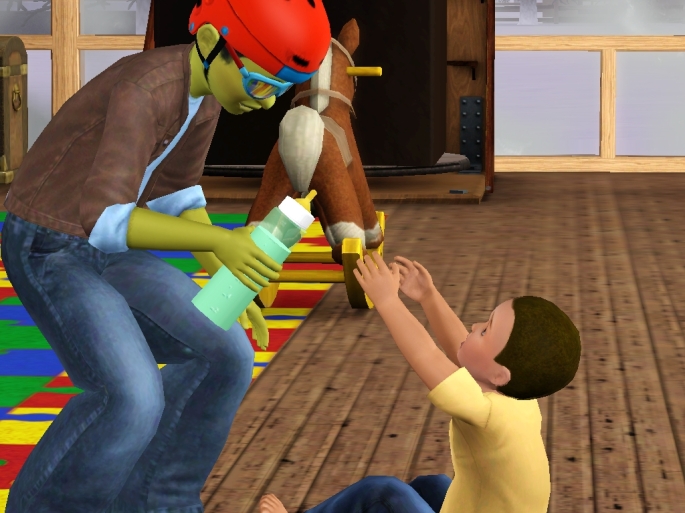 He also helps out around the daycare after school by playing with the kids and helping feed them. 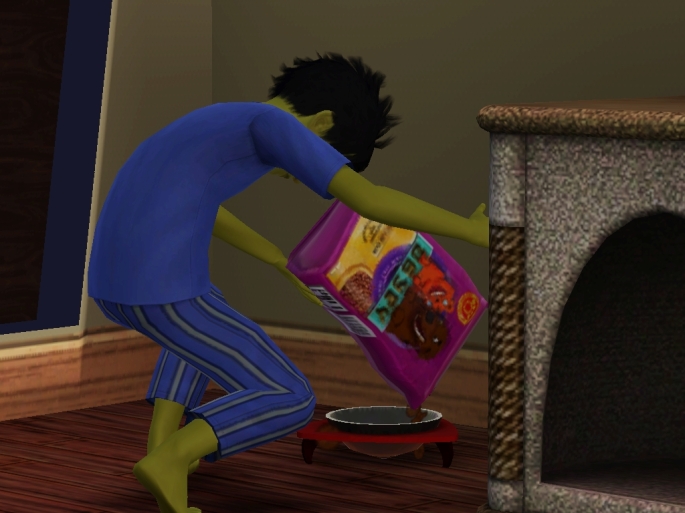 Fletcher is also great at taking care of Rembrandt. 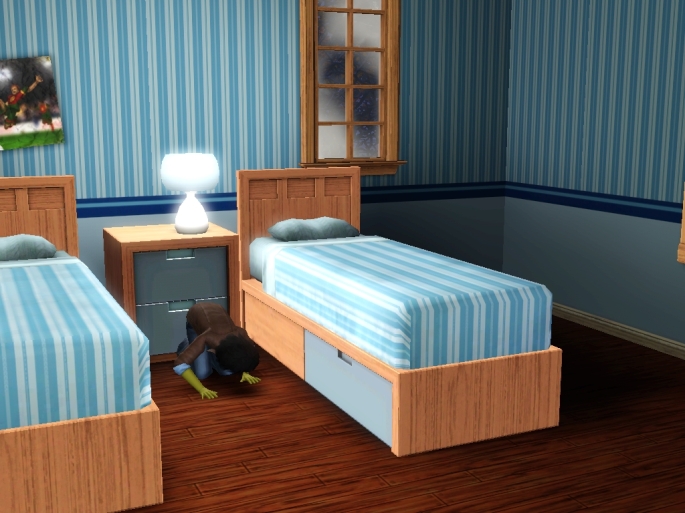 The only thing that does concern me about Fletcher is that every night before bed he always checks for monsters. I can tell sometimes he has nightmares but he never wants to talk to me about them. Ethan was always my go to person for getting rid of monsters so I think I will see if he can have a talk with Fletcher. Ethan should be able to scare those monsters away for good. 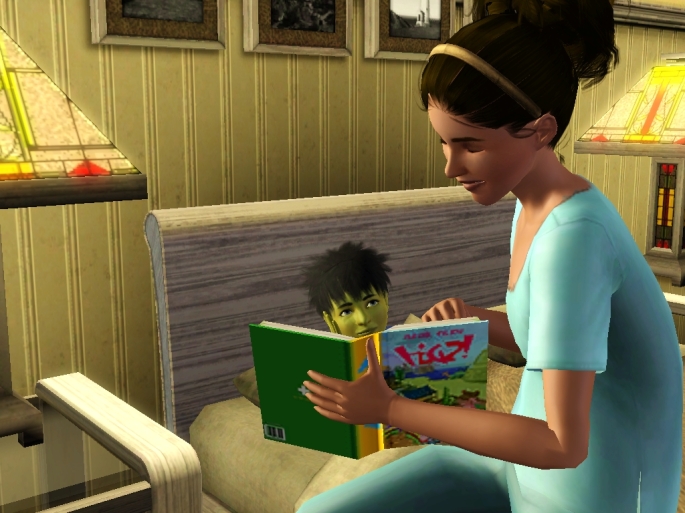 Speaking of Ethan, He and Maritza both adore Fletcher. Most nights Maritza reads Fletcher a story before bed. 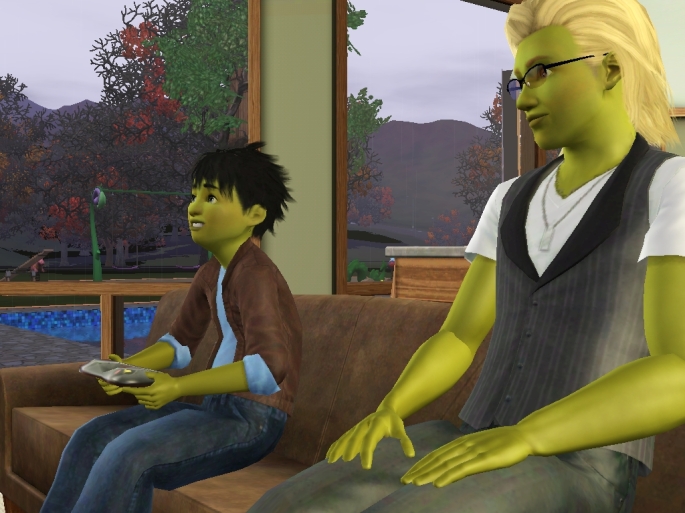 And Ethan and Fletcher can often be found playing video games. 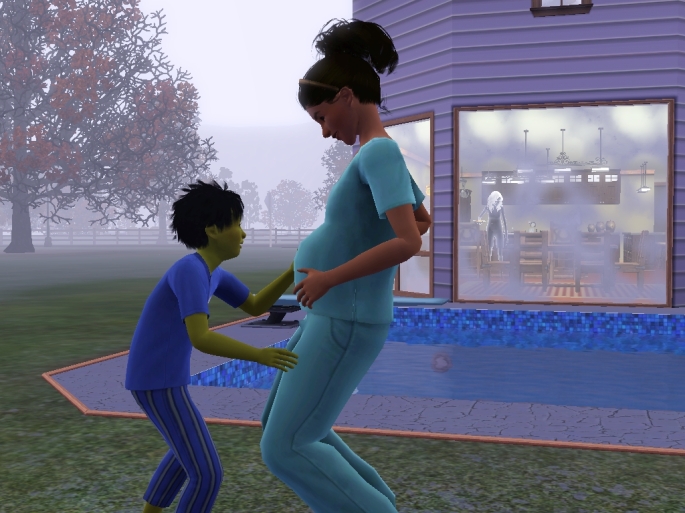 Fletcher is fascinated with Maritza’s expanding belly. He likes to feel the baby kick and talk to it. Maritza says he will probably grow up to become an obstetrician someday. 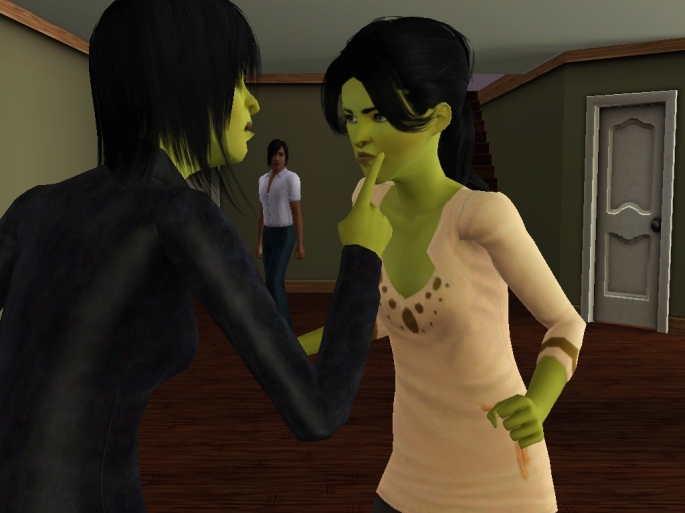 The only one who does not seem to want Fletcher around is my mother. From the moment he came into the house she has acted weird and distant around him. She avoids him and I don’t think in all the months she has been here she has said more than two words to him.

“What is your problem with Fletcher?” I asked.

“I don’t know what your talking about,” she said.

“Oh, come on! You ignore him most of the time and when you do acknowledge him you are down right rude. Are you worried that people will put two and two together and figure out your big secret? Have something come out that could prevent your great big comeback?”

“What are you talking about?”

“Fletcher is your son, isn’t he? You had him when you were living in Starlight Shores and put him up for adoption. He looks exactly like you and me. I know you went off to rehab for a few months – it was all over the tabloids. Grandma and Grandpa tried to keep it from me but I knew. I can do the math. Fletcher would have been born right around that time.”

“No one was ever suppose to know that I had a second child. The adoption records were suppose to be sealed but somehow it got out and now he is here and soon someone is going to be banging on the door asking for money to keep it quiet.”

“The adoption records are sealed. No one knows you are his real mother. Miss Sanders from the agency noticed a resemblance that’s all.”

“If you figured it out others will be able to as well.”

“No they won’t because no one would ever think that the great and wonderful “Emma” would walk away from her child. Emma the international superstar who aside from a small stint in rehab 7 years ago has a blemish free record. The great “Emma” who is known for doing benefit concerts to raise money for various charities. I only figured it out because I know the real Emma. The Emma who would walk away from a child for the sake of her career. You weren’t some scared 17 year old anymore when you had Fletcher. You also weren’t some poor single mother who wanted to give her child a chance a better life. You were a selfish pop star worth millions who was only worried about how a baby would impact your career. Well you don’t have to worry about either Fletcher or me anymore. Don’t worry about your secret. I won’t tell anyone that Fletcher is your son. You don’t deserve either of us.”

Mom didn’t say anything. She just walked out of the room. Ethan told me later that she packed a bag and left. I guess she had been planning on returning to Starlight Shores anyway as her vocal nodes had cleared up. 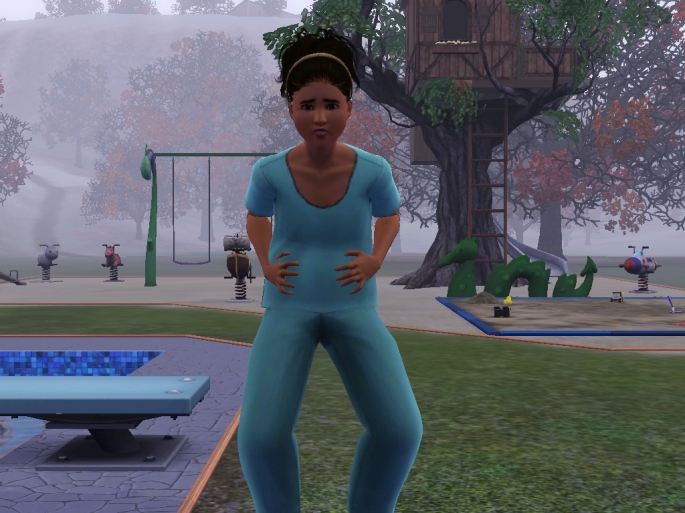 The day after mom left Maritza went into labor. 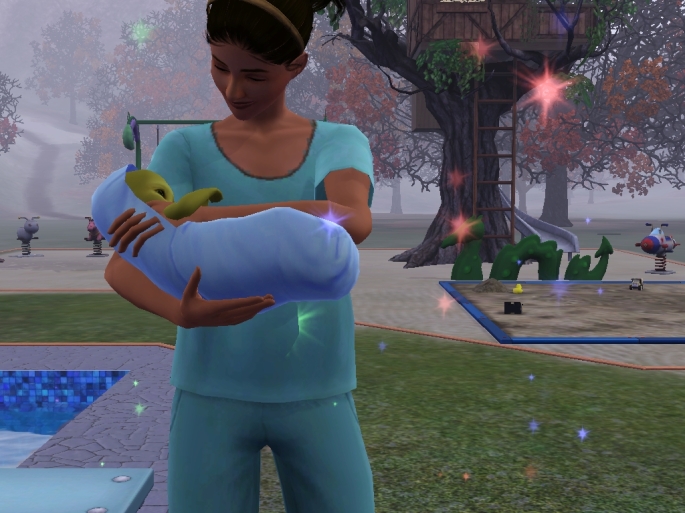 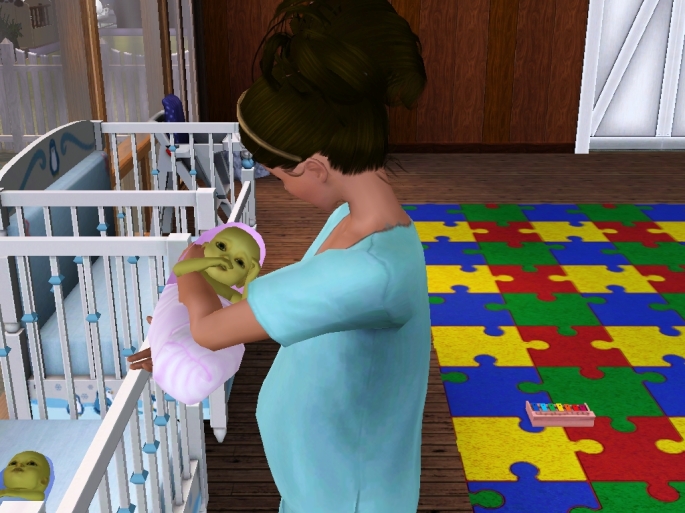 It was a quick labor and she didn’t even make it to the hospital. She ended up giving birth to twins Fredrick and Faith at home. They are both beautiful babies. I love Fletcher but seeing Maritza with the twins makes me long for the day when I might give birth to a baby of my very own.