“Mr. Equidae, I have heard a lot about you. I am please to finally meet you. In case you are wondering I am Anthony Salvadore. I believe you already met my sons Tony Jr. and Angelo. I own this hotel and you sir owe me a lot of money.”

“I will pay you back Mr. Salvadore, I promise. I have had a string of bad luck lately but I will turn it around.”

“I have a better idea. Besides this hotel I also run a variety of other enterprises and I could use someone like you.”

“Are you offering me a job?” I asked.

“I am not offering. I am telling you that you will work off the money you owe me. Now report to the old abandon warehouse on Route 7 tomorrow night at 9 pm. Do not be late.” 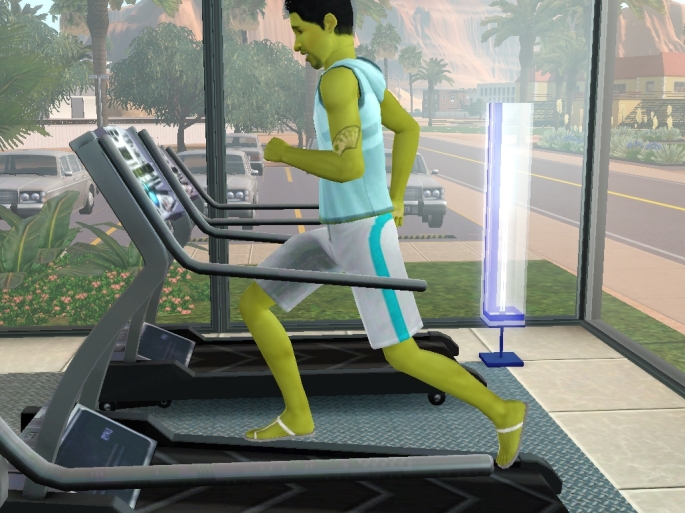 The next day I was a nervous wreck. There was no way I could sit still in my room until 9 pm and I wanted to avoid the casino as gambling is what got me into this mess. So I headed to the gym to work out some of stress and anxiety. 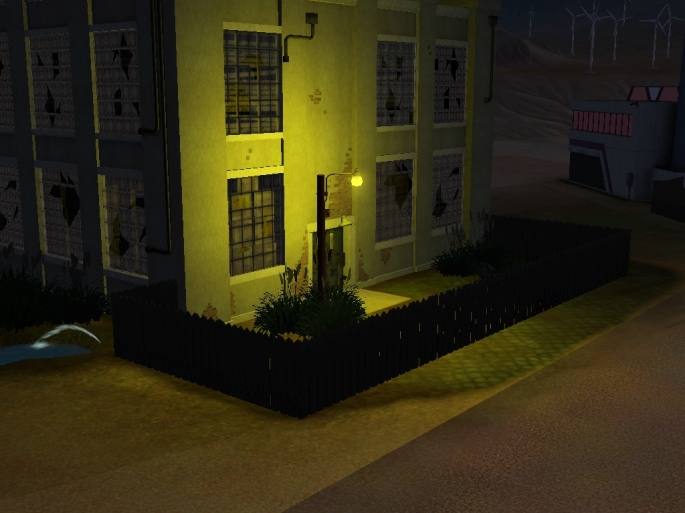 At 9 pm I arrived at the old Warehouse on Route 7. This couldn’t be the right place could it? This looked like something out of a horror movie. 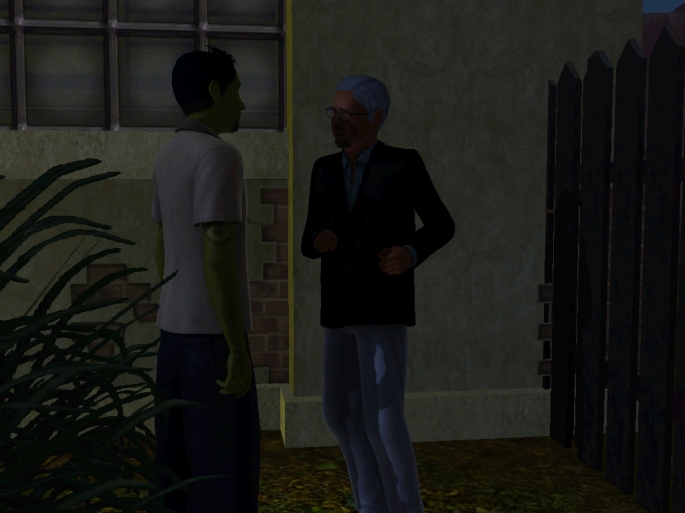 But Mr. Salvadore was there waiting for me. It was so pitch black out I could hardly see his face.

“Here are the keys to my car. It is a very memorable car and I need it to be scene all over town at various places and certain times.”

“You want me to drive you places?”

“No, I will not be with the car. I am needed elsewhere. But I want my car seen in other parts of town. So that if anyone looks into my whereabouts they will get reports of seeing my car in opposite parts of town. Also take this phone. I will call you with other jobs I may need done.”

So I spent the next day just driving the car around Lucky Palms. I parked it outside the hotel for several hours while I just hung out in my room and I drove it to the stadium and left it the lot while I attended a game. Though it is a convertible and I look NOTHING like Mr. Salvadore so if I am spotted on traffic cams or anything they will know I am not him. I am not sure I make a very good decoy. 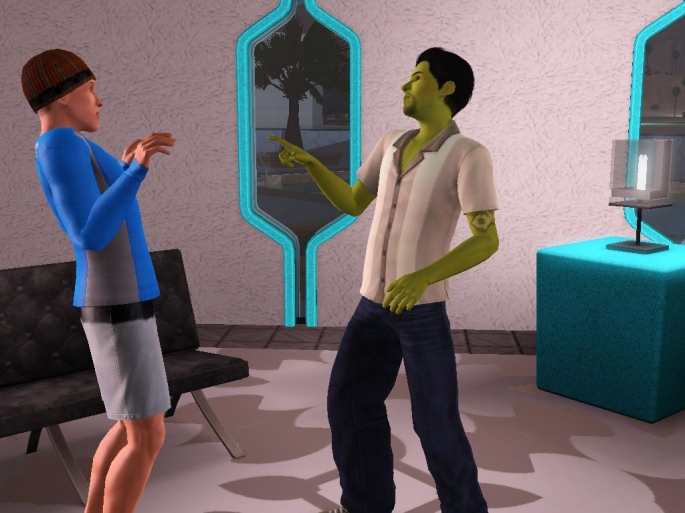 A few days later Mr. Salvadore called me and told me I needed to “collect” a payment from one of his clients who owed him money. I was to collect by whatever means necessary.

“Hey man, stop right there. I am here to collect the money you owe Mr. Salvadore. He said you are a month behind on your latest payment. You know what Mr. Salvadore has done to people who don’t pay up.” Of course I was totally bluffing. I had no idea what Mr. Salvadore would actually do. After all he offered me a job.

But apparently my threat worked because the guy turned white and by the look on his face he was terrified. 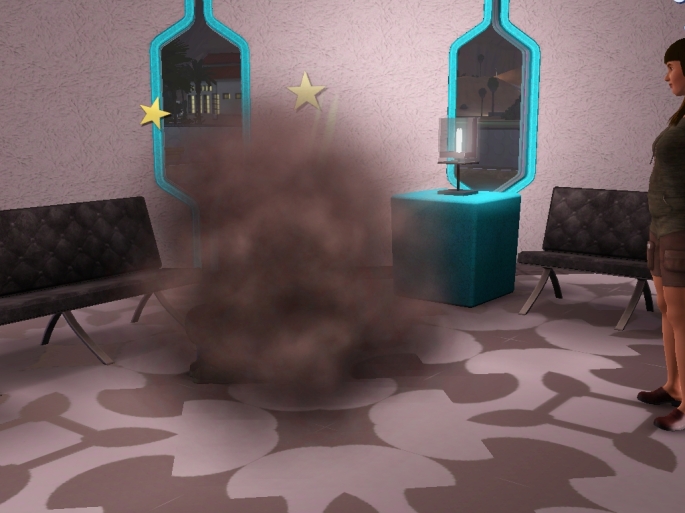 I beat the guy up. 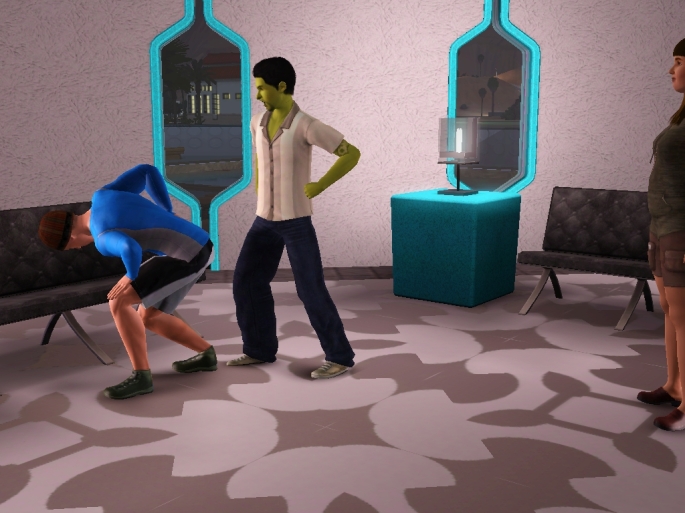 “You will pay by Friday or I will back. And if you think this beating was bad just wait and see what I do to you on Friday if you don’t pay up.”

Since my job’s for Mr. Salvadore were mostly at night I would spend my days jogging through Lucky Palms (the weather here is great) or I would go to the gym. 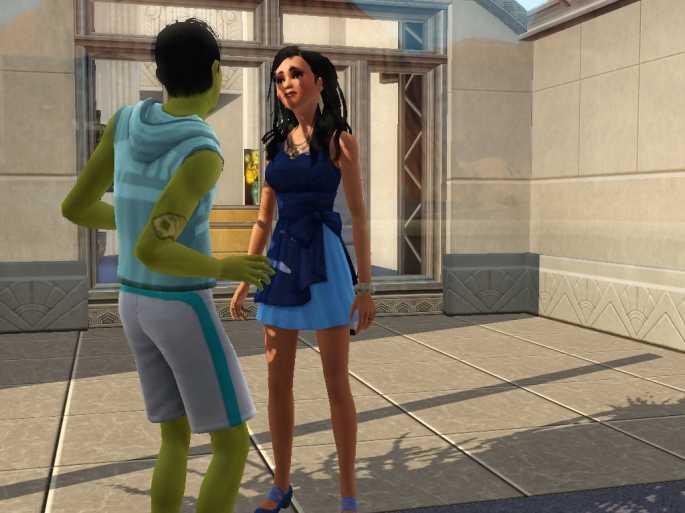 One day as I was leaving the gym I felt all time stop. There walking down the street was Angie.

“ANGIE!” I shouted to get her attention.

“Gavin?! What are you doing here? Did you follow me?” She asked.

“No, I didn’t know where you were going to be after you left Bridgeport. You would never tell my your last name so I wouldn’t have even known were to begin. I just came to Lucky Palms on vacation. After you left I needed a change of scene. What are you doing here?”

“Really, that’s great. We can pick things up were we left them in Bridgeport.”

“I am sorry, but I just can’t,” she said before running off.

A few nights later I came out of the hotel and saw Angelo Salvadore arguing with Angie. How did those two know each other? Were they dating? or worse married? Is that why she couldn’t be with me.

“Is everything ok here,” I asked.

“Mind your business man. This is between me and my sister.”

“SISTER?” I turned to look at Angie and asked “you are Anthony Salvadore’s daughter?”

“Oh yeah this guy knows dad,” Angelo said. “Has been doing odd jobs for the old man for weeks.”

“Really? You don’t mind that his dealings are a little bit shady?”

“Hey, Angie do you know this guy?” Angelo asked.

“Yeah, he is the guy I told you about. The guy from Bridgeport.”

The two shared a look and then Angelo said, “Well I will let you two catch up. We can finish our discussion later.”

“Angie, can we please talk? I heard there was a festival at the park tomorrow. We used to have those back in Appaloosa Plains. They can be fun. Join me there tomorrow. Please.” 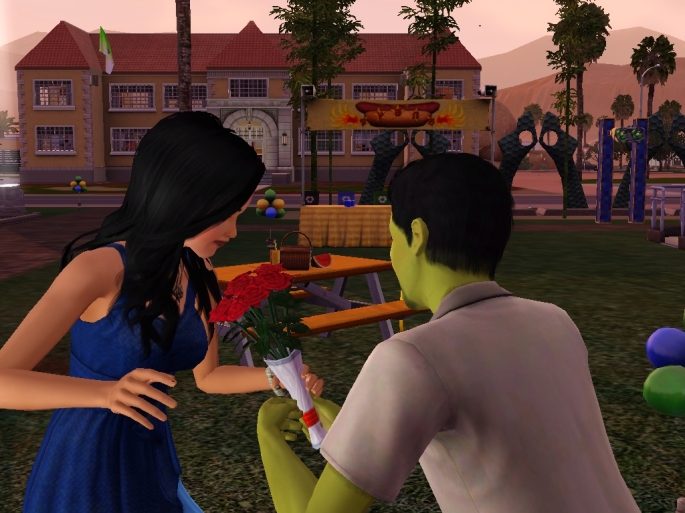 The next day when she met at the festival I had a dozen roses for her.

“Thanks they are beautiful.” 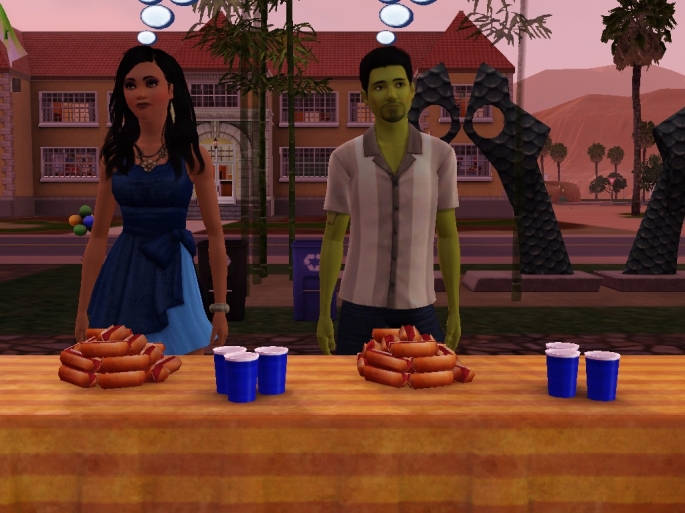 I decided to keep the day light and fun. We played festival games and participated in hot dog eating contest. 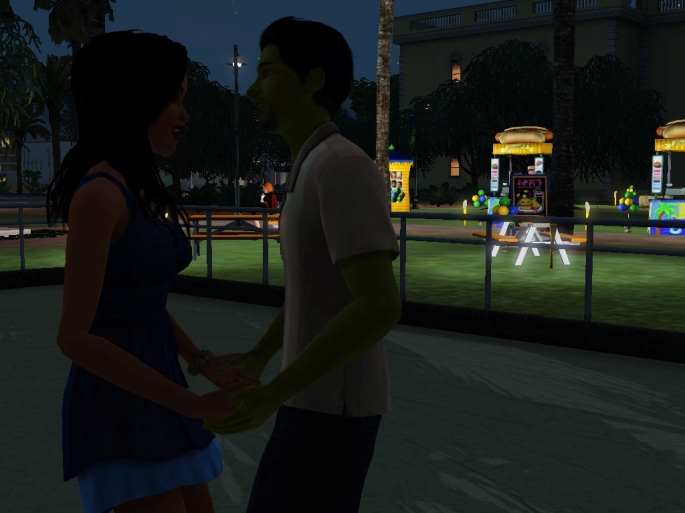 Later we went roller skating under the moonlight.

Neither of us was very good though and we both ended up falling down. As we were getting up I looked into her eyes and said, “please come back to my hotel with me. I have missed you so much.”

“I missed you too,” she whispered.

Angie came back to my hotel and we made love all night long. 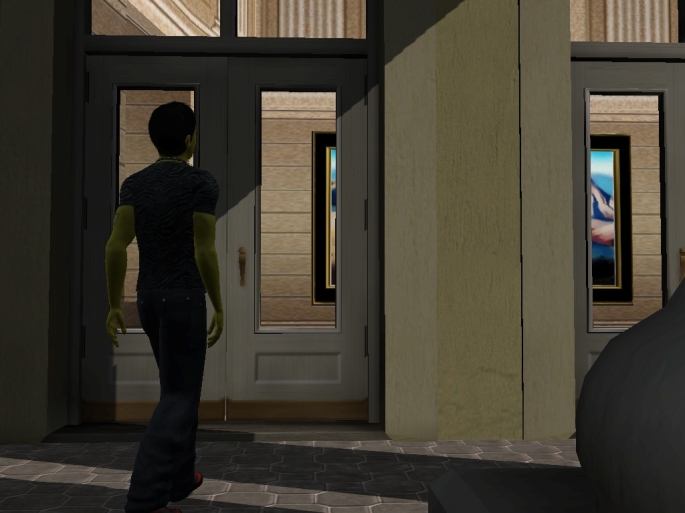 Over the next few weeks, Mr. Salvadore had me doing more jobs for him. I dropped off a package for him at City Hall and met with a local politician to deliver some bribe money. 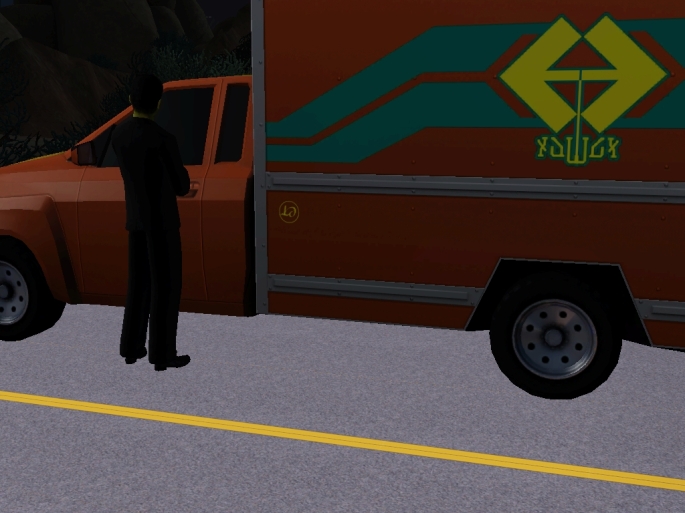 He had me steal a delivery van from a parking lot. He didn’t tell me what was in the van and I figured I was better off not knowing.

When he found out I was invited to a party being thrown by one of Lucky Palms higher profile citizens he had me sneak into the office to steal files off the person’s computer.

Then one night he sent me to the local art museum to still a painting that was worth millions. But I was distracted, thinking about future plans I had with Angie and must have tripped an alarm.

I made a run for it.

But the cop tackled me. 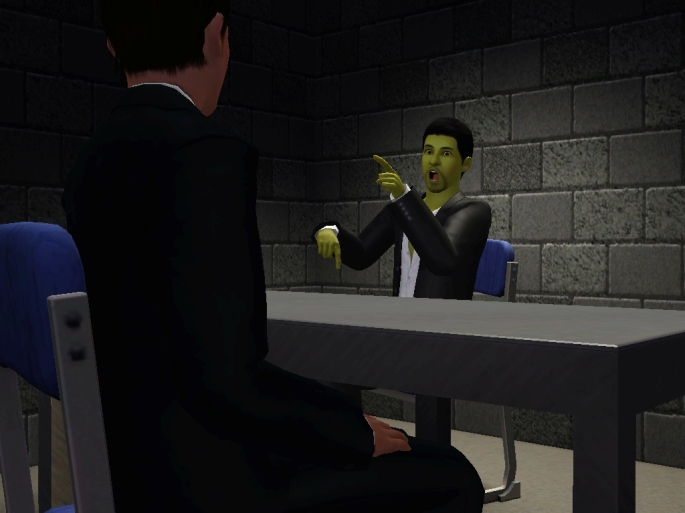 “Mr. Equidae, I am Detective Ragen. I am here to make you a deal. It is well know that you have been doing jobs for Anthony Salvadore. If you are willing to testify that it he sent you to the museum to steal that painting and will testify to some of his other enterprises the DA will drop the charges against you.”

There was no way I was testifying against Anthony Salvadore. Jail was a safer option. Plus he was Angie’s father and I knew she would never forgive me for turning on her father.

“That is where you are wrong. My only relationship with the Salavadore’s is that I have been dating his daughter Angela. I am not working for him and I was in that museum stealing the painting all on my own. I have had some bad luck at the casinos.”

Since I wasn’t willing to make a deal the next day I went before the judge. 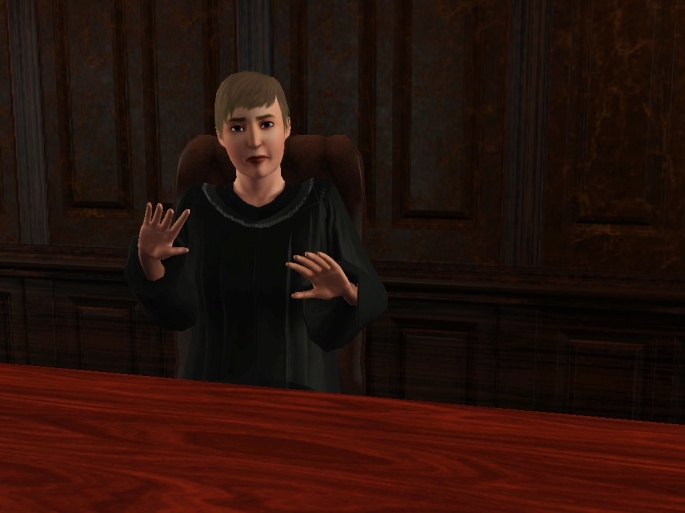 “Gavin Equidae, since this is your first offense and because you were not armed when you broke into the museum I am going to be lenient with you. I am sentencing you to six months in a minimum security prison.

Angie was there in the court room and before I was taken away they let me give her a hug and a kiss good bye.

“I love you, Gavin Equidae. I will visit you and wait for you to get out.”

I can’t believe that after we finally admit our love for one another we are forced to be apart for six months.