Now that the kids are all older they often join me at the gym after work. Ian and I will spend some quality time playing basketball.

Isaac does everything from jump on the trampoline to go swimming to kick around the soccer ball.

Isabelle takes ballet a few days a week after school but when she doesn’t she likes to come to the gym to practice her moves.

I have moved up in the political career and am currently running for local representative. I decided to hold a campaign fundraiser and invited all of our friends and family.

Eboni prepared a variety of snacks.

And we hired a bartender to keep the drinks coming. 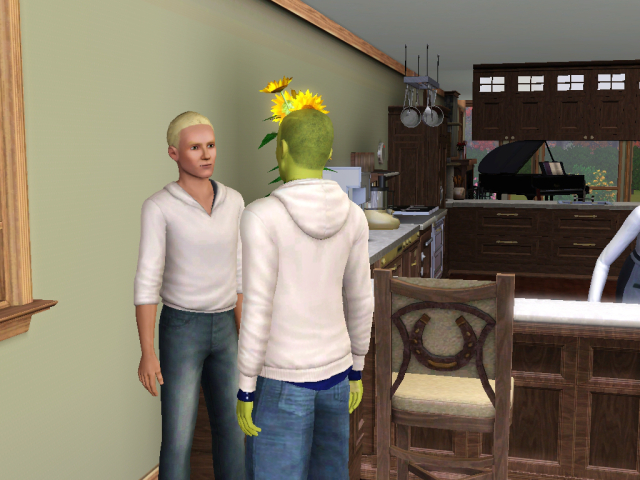 I also got donations from several other friends and family members. The party was a huge success and before long I was elected to local office.

As a thank you to my family for all of their support during my campaign I took them all to the fall festival for some family fun. Ian, Isabelle, Isaac and I all participated in a pie eating contest. Being a growing teenage boy Ian won hands down.

When we got home the twins carved jack-o-lanterns out of the pumpkins that Eboni had gathered at the festival.

While they were doing that Ian took his girlfriend Gwendolyn McLendon to prom.

Later that night we had a private birthday party (just the four of us) for Isabelle and Isaac. 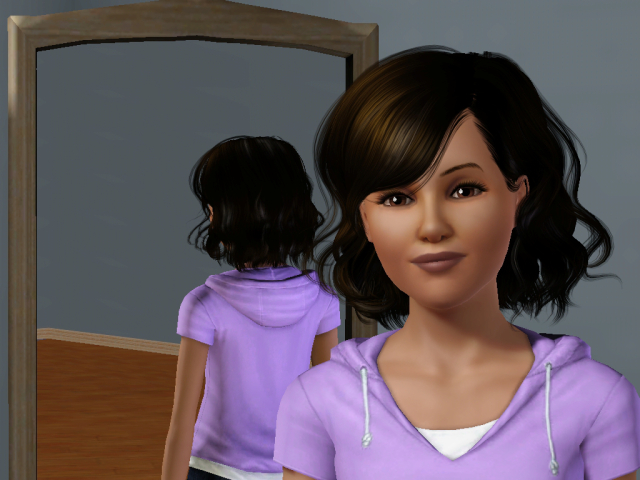 Isabelle is a very pretty teen.

Isabelle is a cat person and she really wanted a cat for her birthday. She had found this cat earlier in the day at the festival and begged us to let her keep him. We agreed. Since it was Halloween she decided to name him Spooky. 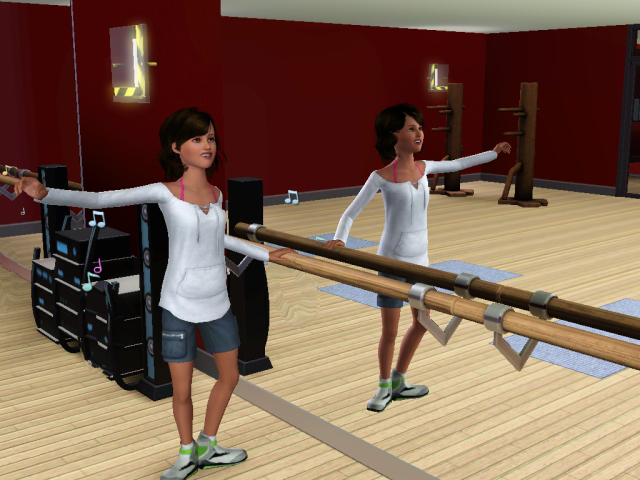 Isabelle is also still an avid dancer. She spends most of her time at the gym practicing her ballet steps.

And Isaac a handsome young man. 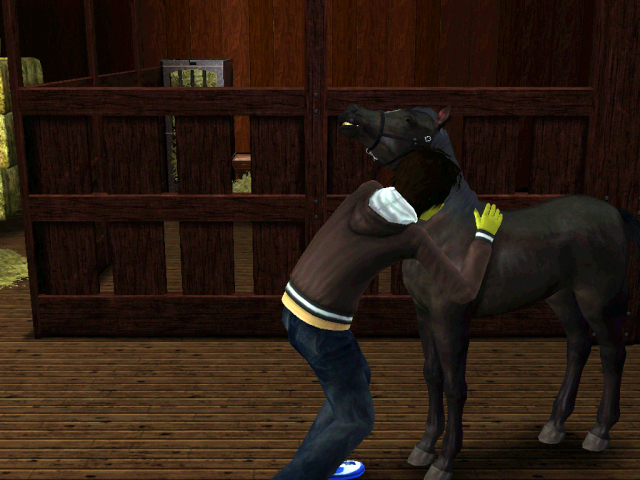 While Isaac likes all animals he loves horses. We eventually got him a pony whom he named Shadow. 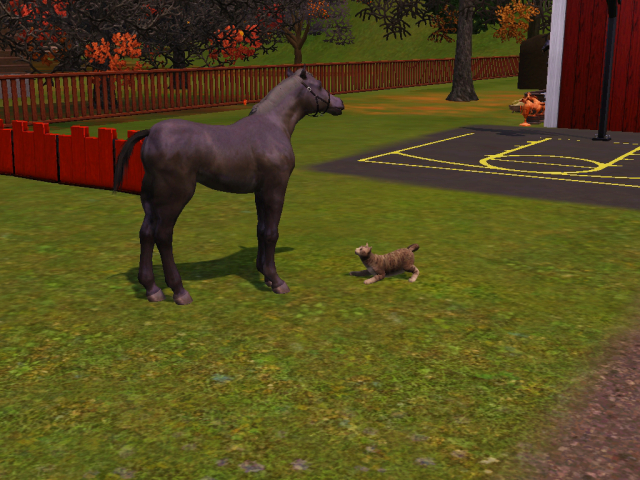 Shadow and Spooky get along great and are always chasing each other around the yard.

Isaac is super handy and has been going around the house fixing everything from computers to sinks to the dishwasher.

And when he isn’t fixing things he is tinkering with them.

I have decided to run for Mayer and my opponent is a man named Milton Farnsworth. He has resorted to some dirty tactics and held a anti-crime protest. I am against crime as well so at first I wasn’t sure his angle. Then he started going on about how we didn’t need a Mayor with ties to organized crime.

During a public debate I decided to call him out on his claims.

“My opponent has made some accusations stating that I am tied to organized crime. Well I want to come out and refute those claims. The Equidae family is very well known here. We have had decorated police officers, firefighters, doctors, etc. We have never had ties to organized crime.”

“Really?” Milton said. “What about your father. He spent six months in jail for the attempted robbery of an art museum and your grandfather on your mother’s side of the family was Luckly Palms crime boss Anthony Salvadore. In fact your father was rumored to be working for him at the time of his arrest.” 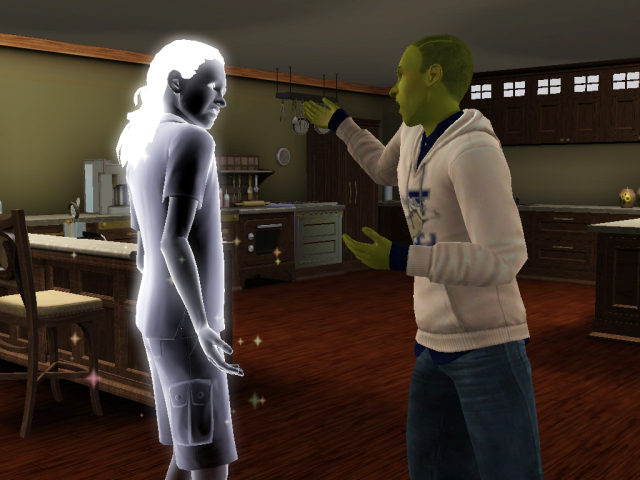 Later that night I confronted my father’s ghost. I was shocked when instead of denying the claims he confirmed that they were true.

“HOW COULD YOU NOT OF TOLD ME?” I shouted.

“Your mother and I wanted to protect you. We put that life behind us when we moved to Appaloosa Plains.”

“YOU SHOULD HAVE TOLD ME! DO YOU HAVE ANY IDEA HOW EMBARRASSING IT WAS TO BE BLINDSIDED DURING THE DEBATE.”

Despite my dad’s criminal paste being brought up by my opponent my supporters knew that I was not my father. I was a well respected athlete and I was known for my charitable donations to various good causes over the years. So on election day I was thrilled when they announced that I had been elected as mayor of Appaloosa Plains. 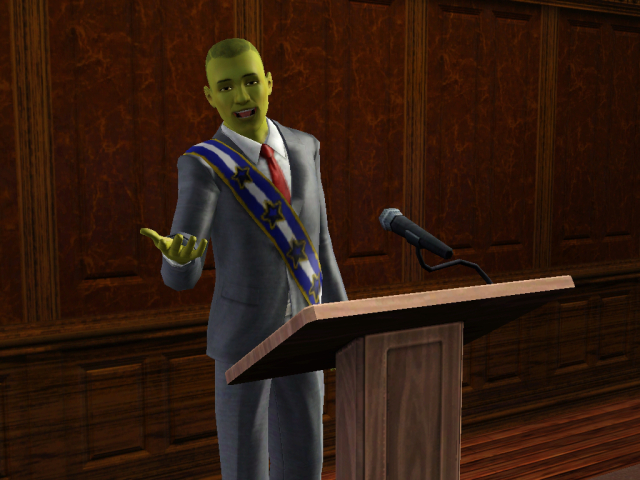 I want to thank all of those who voted for me. I promise to do my best in this position.

Shortly after election day it was Ian’s birthday.

He is following his dreams by becoming a police office.

His girlfriend Gwendolyn is a firefighter and he surprised her one day by showing up at the fire house and proposing marriage.

And the two exchanged vows on a beautiful spring day in our backyard.

It was a beautiful ceremony with not a dry eye in the house.

Afterwards they cut the cake.

And then as the sun started to go down we all slow danced under the stars.

I am not much of a dancer and stepped on poor Eboni’s toes a time or two. After the wedding Ian and Gwendolyn moved into a place of their own.

Later that night both Eboni and I aged into elders.

This marks the end of Generation 8. Isaac will be our heir going into Generation 9.